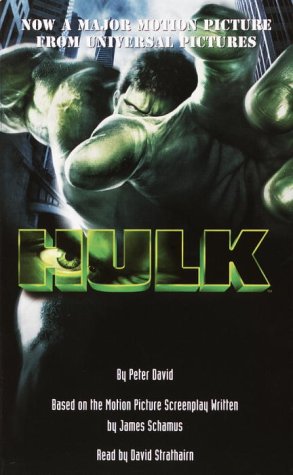 This well-done abridgement packs the plot twists, character development and pulse-pounding action of David's novel (adapted from the screenplay of the upcoming movie) into a tight, fast-paced tale. Barred from experimenting on human subjects, scientist David Banner does experiments on himself that cause mutations he later passes on to his son Bruce. David hammers home to little Bruce that he must never ever get angry, because bad things will happen if he does. Years later, a scientist himself, Bruce is accidentally blasted with gamma rays in an experiment gone wrong, and the combination of the rays and his mutation turn him into the green-skinned, bestial Hulk. Reader Strathairn treats the story seriously, without any hint of comic book camp, which allows listeners to feel for the characters and believe in the story. Strathairn also does a good job using his voice to differentiate the characters: blustering General "Thunderbolt" Ross, controlled and repressed Bruce, smarmy Glen Talbot, increasingly mad David Banner, and Betty Ross, Bruce's concerned fellow scientist and love interest.