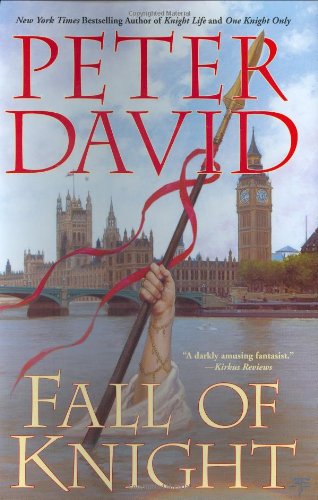 The conclusion of David's 21st-century Arthurian trilogy will please fans of the previous two books, and , but those expecting humorous fantasy on the level of Terry Pratchett or Monty Python will be disappointed. King Arthur, who has served as the mayor of New York City and even as president of the United States under the name Arthur Penn, is suddenly forced to tell the world who he really is and that he possesses the Holy Grail. Attempts to go mass market with the Grail's curative properties create complications involving Nazis and assorted other menaces. Despite the author's propensity for punning titles and silly archaisms like "Ye Olde Interlude," the resultant oil-and-water mixture achieves neither comedy nor drama, much less a blending of the two as in T.H. White's . The incongruity of great, mythic figures behaving (or speaking) in an entirely banal and trivial manner is, alas, only that.