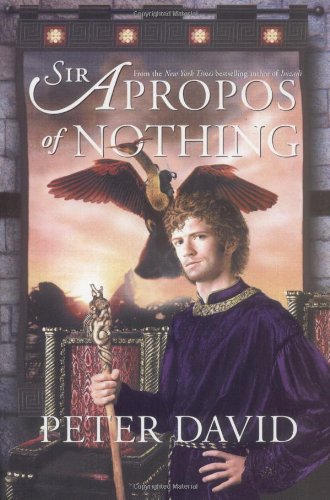 SIR APROPOS OF NOTHING

An antihero for the 21st century, Apropos springs from his mother's womb with a full set of teeth, ready to bite anyone who gets in the way of his survival in this fast, fun, heroic fantasy satire. Serious issues are bound to concern a child born of a gang rape conducted by knights who wouldn't know the Holy Grail even if it was filled with mead and emptied over their heads. David, author of more than 40 novels, primarily or related, knows how to spin a story, entertaining the reader with pathos, bathos, mythos and psychos. When Apropos sets off to rescue a bratty, Hecate-worshipping princess named Entipy, he's an angry young man, lame of leg and spirit. As a reluctant hero he must endure a wicked phoenix, the Outer Lawless Regions and the Screaming Gorge of Eternal Madness, not to mention the annoyingly brave Tacit, who claims he was raised by unicorns. In the course of his quest he also discovers his father and learns how to turn lemons into a high-octane lemonade. At times repugnant, at others delightful, but never boring, Sir Apropos wants to "break out of the little box that I had been placed in, first by society, then by the knights, and now by destiny itself." Of course he blows the box into smithereens, as does David, who appears to be planning still more adventures (and hopefully, misadventures) for his cranky, crazy knight.