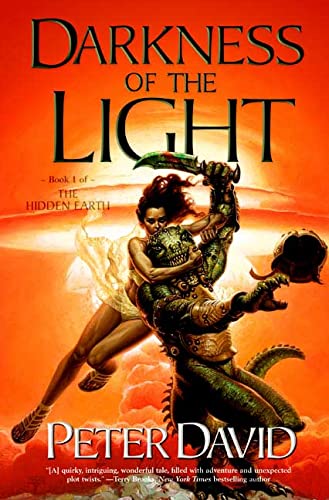 Darkness of the Light

estseller David sets this clever, fast-paced fantasy on the Damned World (formerly Earth), home to a handful of enslaved humans, a greatly feared Overseer and the exiled inhabitants of the Twelve Races. Having nearly destroyed humanity, a variety of strange creatures now battle each other. Jepp, a freed human slave, joins a mixed-race band of scavengers. The king of the Cyclops orders Jepp’s group to steal the Orb of Light from the trolls, believing its magic will destroy the bloodsucking vampires who have stolen his niece. Meanwhile, the Overseer investigates why hotstars, the energy source for most of the tech on the Damned World, are fading out. As Jepp discovers her own hidden powers, the Overseer realizes that the Twelve Races must understand humanity’s place in their universe or risk annihilation. David ( ) is a master at juggling multiple characters and plot lines—and, in what one hopes is the first in a new series, breathes new life into some well-worn mythic tropes.