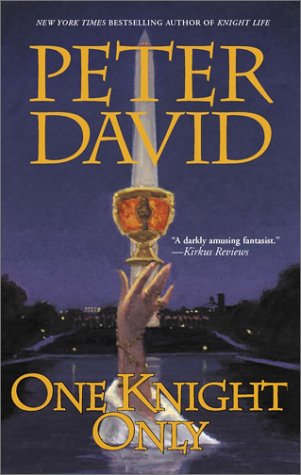 Having made England's doughty King Arthur (aka Arthur Penn) mayor of contemporary New York in last year's , David now has his charismatic hero attempt to carve the White House into a new Camelot. At first Arthur's problems seem mere irritations, though reincarnated wife Gwen is now itching to do "something meaningful," like health care reform. Then Arthur's world suddenly shatters. With his grouchy wizard Merlin frozen into a presidential Rose Garden ornament and Gwen slammed into a deadly coma by Arthur's mortal enemy, the Mideast terrorist Sandoval, Arthur resigns the presidency and embarks on a perilous quest to release Merlin and heal Gwen with a swig from the Holy Grail. This irreverent romp impartially jousts at White House staff pomposity, the inanities of today's press corps, Congressional antics and mismanaged U.S. foreign policy. Some of the goings-on are belly-laugh funny, but overall the comic effect is diluted by the flattish characters, including Gwen and even Arthur himself. Plenty of gory violence, some gratuitous First Lady kinkiness, and a wild mix of ancient legends of incredibly Hulkish baddies will resonate with the post-adolescent readership that would seem to be David's primary audience. The novel closes on a note less of rightful revenge than of relentless relief—even as Arthur Penn, former U.S. president, Britain's once and future king, deserves a more fitting fate. (