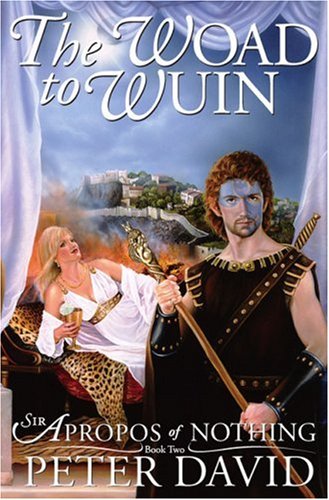 THE WOAD TO WUIN: Sir Apropos of Nothing, Book Two

This sequel to the wildly successful (2001) starts off with a bawdy send-up of , but quickly segues into its own territory with the appearance of a mysterious Visionary at Apropos's bar, Bugger Hall. The man tells our antihero, "You will become a shadow of your former self while escaping to the Tragic Waste on the Road to Ruin" (or is that "Woad to Wuin"?), just as Sharee, Apropos's weaver companion from the first volume, bursts in and begs for his help in escaping Lord Beliquose. The very loud lord wants a powerful gem, the Eye of the Beholder, which the virtually powerless Sharee possesses and which Apropos promptly steals during their escape into the dominion of the Rockmunchers beneath Bugger Hall. Unfortunately, the gem enchants Apropos during their subsequent arrival at the Tragic Waste and turns him into Peacelord of Wuin, a barbarian who wears blue "woad" on his face before battle and has, as his consort, the beautiful but possibly quite wicked Lady Kate. When Apropos shakes off his amnesia, he resolves to reverse his fate—and that of Sharee's in a world turned upside down by violence. He also hopes to avenge his mother's death. The wisecracking wordplay that fans have come to expect skips smoothly off the page, lifting this satirical fantasy into a class all its own. Juggling goofy entertainment with gritty philosophical musing, David should build plenty of momentum for the promised third act, .