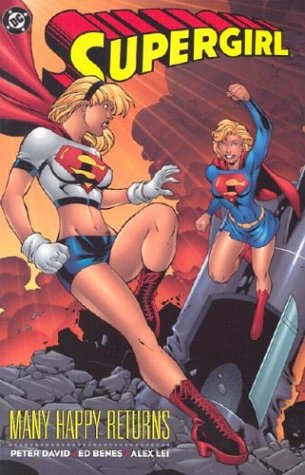 This project illustrates the pros and cons of working within the DC universe. After decades of appearing in multiple comics, the DC superheroes have accumulated such complicated personal histories, it's difficult to do a new story that acknowledges relevant past experiences and simultaneously copes with present crises. Trying to revitalize sales of the most recent version of Supergirl, writer David resurrected the original version (Kara Zoe-El, Superman's blonde Kryptonian cousin) and dropped her next to the contemporary Supergirl (Linda Danvers, brunette Earthling). Both are gorgeous, and the many panels displaying them in skimpy spandex outfits are droolworthy. However, David's avowed purpose is to contrast Kara's sweet, klutzy naïveté with Linda's more jaded adolescent angst. This aspect of the story works, especially when the more scientifically informed Linda patiently corrects Kara's assumptions about the extent of her superpowers. Working against this genial mood is the fact that a Supergirl eventually will have to die as part of DC's major megastory from 15 years ago, . Also, David feels constrained to use more characters from the DC stock company, including gleeful villain Xenon, who's having a fine time killing Supergirls one by one. And so the plot spins along, ransacking the career of Superman and company for events to stitch together and reinterpret in a fresh light. It's all ingenious but ultimately shallow. There's only so much lore that average readers can keep handy in memory, and this story line requires more than all but Supergirl loyalists can supply.