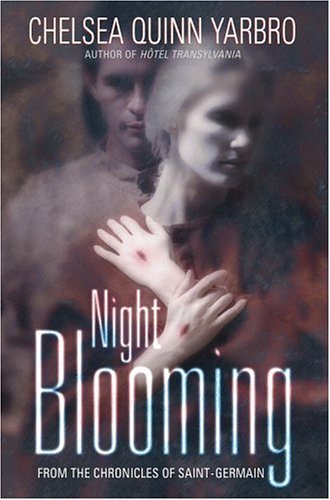 The prolific Yarbro (, etc.) flawlessly weaves a meticulous historical milieu and enthralling characters with the fantastic in her 15th volume to feature compassionate vampire Ragoczy, Count Saint-Germain. Here known as Hiernom Rakoczy, he travels in A.D. 796 to Tours and later Aachen to advise the Frankish king, Karl-lo-Magne (Charlemagne), who's closely allied with Pope Leo III. Meanwhile, saintly albino Gynethe Mehaut struggles within a church that can't decide whether her stigmatic wounds denote holiness or blasphemy. The white woman and the dark count, still recovering from an ill-fated encounter in (2000), eventually cross paths in Rome, where their passions ignite, though those expecting the high eroticism of Laurell K. Hamilton will be disappointed. The melancholy count regains some joie de vivre when he's reunited with his old friend, the always remarkable Atta Olivia Clemens. Richly rewarding for longtime readers, the novel also provides a good entry point for new recruits with its subtly supplied back story. The eighth century European setting is more accessible than the 14th century India-Asia setting of the previous book in the series, (2001). In Yarbro's saga the vampires are honorable, civilized and heroic—it's humankind that's horrific. Current popular vampire fiction reflects her influence more than that of the better known Anne Rice, and her noble vampire deserves comparable sales.