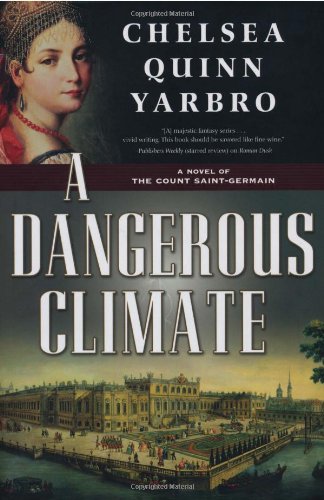 A Dangerous Climate: A Novel of the Count Saint-Germain

Rich with historical detail and intrigue, Yarbro’s 21st Count Saint-Germain novel (after 2007’s ) unfolds in 18th-century Russia at the height of Peter the Great’s effort to wrest St. Petersburg from the swamps and spearhead the modernizing of his nation. Benevolent vampire Saint-Germain plays both sides, contributing engineering suggestions to the czar’s efforts and intelligence reports to the Polish monarchy. As usual, several difficulties threaten to expose his secret identity, and he battles ignorant and superstitious opposition to his enlightened teaching and doctoring skills. Though sluggishly paced in spots and minimally supernatural, this meticulously researched entry deftly displays Yarbro’s ambitions to use her vampire hero as a lens to focus on the best and worst of human behavior throughout history.