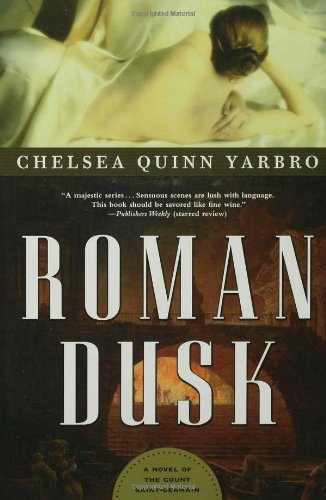 Roman Dusk: A Novel of the Count Saint-Germain

Set in decadent third-century C.E. Rome, Yarbro's 19th volume in her majestic fantasy series (after 2005's ) is one of her finest yet to feature heroic vampire Saint-Germain, here known as Ragoczy Germainus Sanct-Franciscus. Despite his wealth, discretion and careful observance of the social niceties, Sanct-Franciscus must be careful as a foreigner. All his precautions, however, can't prevent an official from placing a spy in his household and targeting him for tax evasion and worse. Even as Sanct-Franciscus shelters and aids an abused courtesan, doctors a dying noblewoman and befriends her virginal daughter, he must contend with a fanatical young follower of one of the many religions of the day, Christianity. Sensuous scenes are lush with language ("her sumptuous body still quivering in apolaustic abandon") rather than the explicitly erotic. Meticulous attention to historic detail and vivid writing bring an ancient era to life. Unlike most generic vampiric novels that can be quaffed in a quick if entertaining gulp, this book should be savored like a fine wine.