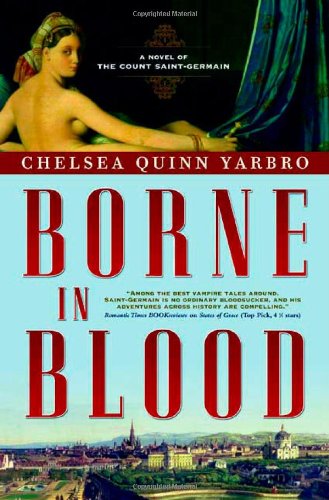 Borne in Blood: A Novel of the Count Saint-Germain

If Anne Rice is the celebrity journalist of vampires, Yarbro is their domestic chronicler. The meticulous 20th entry in her Count Saint-Germain saga (after 2006’s Roman Dusk) finds her 4,000-year-old hero in the Swiss countryside of 1817, helping the struggling locals recover from the Napoleonic wars and severe winters. By this period, Saint-Germain is a cultured and compassionate figure, occupied with the spread of knowledge through publishing and the child custody struggles of his lover, Hero Corvosaggio. His greatest threats come from discharged soldiers turned bandits and an abused debutante turned murderer, whose blood-obsessed guardian he lectures on the difference between heredity and destiny. Monsters are made, he knows, not born. Yarbro piles on the historical detail, giving an intimate look at the households of early 19th-century Europe and the commerce and travels of its inhabitants. Letters, with headnotes on their delivery methods and times, litter the text, adding to the period feel. Intimate, too, describes Saint-Germain and Hero, whose relationship is explored in fine-grained emotional as well as physical terms. (Dec.)