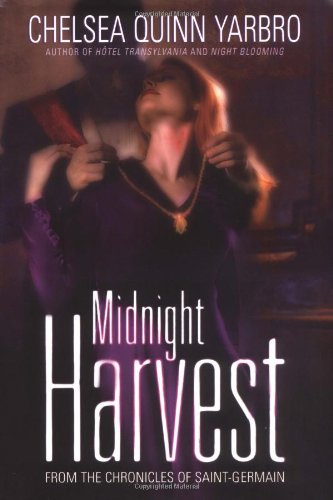 Set in the 1930s, Yarbro's 16th assured Count Saint-Germain adventure takes the 4,000-year-old vampire to the United States. First, however, he must flee an unstable Spain on the eve of civil war, a move that costs him a lucrative airplane manufacturing business and gains him dangerous new enemies. Encounters in Boston and during a cross-country trip with the ever-faithful Rogerio reveal an America gripped by the Great Depression and wary of "foreigners." He's relieved to arrive in San Francisco, where he reunites with the now-mature but still desirable artist Rowena Saxon (first met in ), but his stay there proves less safe—for both himself and his friends—than he had hoped. Vintner Carlo Pietragnelli, sustained financially by the Count through the years of Prohibition, and his neighbors are suffering theft by "midnight harvesters," but a bigger threat comes from the murderous Ku Klux Klan—like White Legion. Meanwhile, a ruthless assassin has followed Saint-Germain from Europe. Though far from fast-paced or action-packed, the novel provides fascinating historical detail interspersed with sensual interludes and enough intrigue to sustain interest. Intelligent parallels with the present provide depth. The difficulties 20th-century life presents for a vampire are well handled by the remarkably consistent author, who is, as always, true to her character. Like its immortal protagonist, this long-running series deserves to live on.