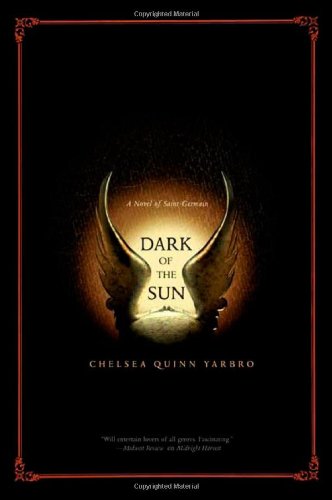 DARK OF THE SUN: A Novel of Saint-Germain

Yarbro's 17th entry in her historical-horror series ( , etc.) adroitly uses the ever-metaphoric vampire to portray the human dimensions of a cataclysm that changed the course of history. Vampire Saint-Germain and his faithful companion, Roger, who go under the names Zangi-Ragozh and Ro-shei in this solid installment, are merchants in sixth-century A.D. Yang-Chau, as Shanghai was called during this period. Forced by political necessity to journey westward to Chang'an (aka Xian) during winter, the pair soon realize that this is a winter like no other. Never in his more than 3,500 years of existence has the well-traveled vampire experienced anything similar—a sun with "no warmth or strength," strange yellow snowfall and an "invisible cloud" distorting the sky. Unbeknownst to most of the world, an eruption of the volcano Krakatau (aka Krakatoa) is to blame. Agricultural and economic disruption result, illness spreads, social unrest and collapse follow. The Dark Ages begin. Faced with a multitude of hardships, Saint-Germain determines to travel across Asia to his native soil in the Carpathian Mountains. The romantic and supernatural play second fiddle to history in this well-told story that deals with the meaning of being human.