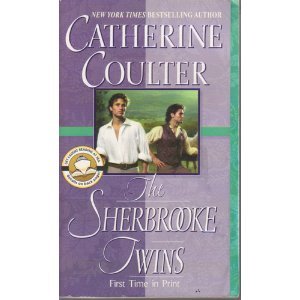 Those who are drawn to the humor and cozy family dynamics of Coulter's Bride series ( , etc.), starring the lovable Sherbrooke family, will relish this new installment, which focuses on dashing identical twins James and Jason. The twins have had their share of sexual escapades, and though they think they still have a few more years to sow their "wild oats," romance sneaks up on them. James finds himself drawn to his tomboy neighbor, Corrie, who transforms from duckling to swan for her first season in London. Meanwhile, Jason waltzes into love with the alluring and mysterious Judith McCrae. But the twins' romances are put on hold when someone tries to kill their father, Douglas. Suspicion revolves around a man named Georges Cadoudal, a French spy who died 15 years earlier. Douglas suspects that Cadoudal's children may be trying to seek revenge, but he doesn't know how to track them down. Those new to the Sherbrooke family may be baffled by the mystery surrounding Cadoudal, but they'll be thoroughly charmed by James and Corrie and the affectionate banter among the family members, though some of their gags grow old after a while. A clever surprise ending wraps up the mystery subplot neatly and will ensure that many readers return for the next entry in Coulter's Sherbrooke saga.