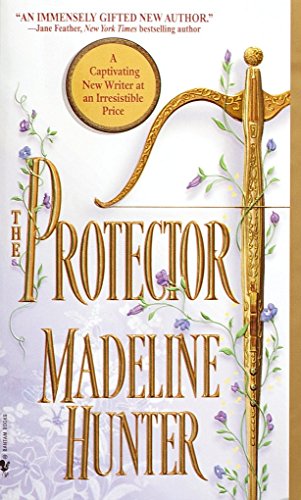 Brimming with rich historical detail and fiery repartee, Hunter's latest 14th-century romance (following ) is a battle of wills between Breton warrior beauty Anna de Leon and Morvan Fitzwaryn, the knight who is determined to subdue her. The Black Plague propels Morvan to seek refuge on Anna's lands, but when the disease fails to claim him, Morvan assumes a position as one of Anna's knights. With her father dead and the war over Breton raging between England and France, Anna must don men's clothing and a sword to defend her people. Morvan, however, is chiefly concerned with keeping Anna safe. Despite her attraction to Morvan, Anna is bound to enter the abbey once her younger sister is married. In addition, Anna's ignorance of her own attractiveness leads her to think that Morvan is only after her family's estate. Their path to attaining a loving relationship is freckled with a few feverish battles, several humorous minor disputes and many compromises, as Morvan slowly learns to accept Anna for the brazen, independent woman she is. Hunter is at home with this medieval setting, and her talent for portraying intelligent, compelling characters seems to develop with each book. This feisty tale is likely to win her the broader readership she deserves.