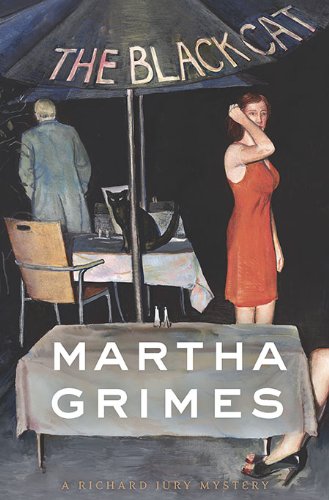 At the start of bestseller Grimes's muddled 22nd Richard Jury mystery (after ), the body of an unidentified woman, who reminds Jury of a Pre-Raphaelite beauty, lies in a mortuary in High Wycombe, Buckinghamshire. Shot outside the Black Cat, a local pub, the victim was wearing expensive clothes, decorous yet sexy. The Thames Valley police wonder why Jury, a Scotland Yard superintendent, is intruding on their turf. The victim proves to have been a professional escort, the only witness to her murder the pub's black cat. Cats and dogs can share their thoughts, mostly mundane, with one another, but, alas, not with humans. More escorts get killed. Unresolved cases from and its predecessor, , complicate the plot to little purpose. Off-kilter details jar. No London copper would ask a London cabbie if the cabbie knows a particular street. This subpar effort from one of mystery's major stars will appeal mainly to fans of the talking animal subgenre.