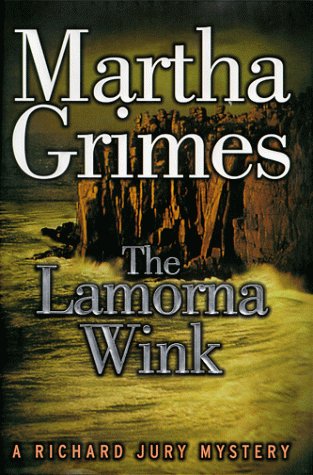 In her 16th Richard Jury mystery, Grimes delays the great man's appearance until late in the game, but the novel is nonetheless as consuming as its 15 predecessors (most recently, The Stargazey, 1998). Here, Jury's pal Melrose Plant leases Seabourne, a lovely oceanside house in Cornwall, where four years earlier two children died from an inexplicable fall down a flight of stone steps. Their parents fled to London; their grandfather, who owns Seabourne, refitted a local stately home into a hospice/nursing home, where he now lives. Melrose befriends Johnny Wells, a vivacious teenager with ambitions to become a magician, who lives with his Aunt Chris. When Chris vanishes and another woman, whom Chris detested, is found dead in neighboring Lamorna, Melrose calls Div. Comdr. Brian Macalvie of the Devon and Cornwall Police Department, whom Plant and Jury first met as a hot-tempered constable in Help the Poor Struggler. As two more murders follow, Melrose and Macalvie realize they are investigating two different cases, with vengeance the motive for one, the other connected to a child pornography ring. At last, Jury arrives fresh from a case in Northern Ireland and helps solve the crimes, past and present, although it is the hypochondriac Sergeant Wiggins (now hooked on the Bromo Seltzer he discovered in Baltimore in The Horse You Came In On, 1993), whose voluminous note taking leads to the linchpin clue. In addition to richly portrayed characters and stunningly described settings, the tangled plot is strewn with a host of genuine clues, as well as red herrings that beguile as effectively as they mislead. Grimes fans will be particularly intrigued as Melrose contemplates his childhood, revealing more about his complex personality than ever before. Mystery Guild main selection; Literary Guild and Doubleday Book Club alternates; 12-city author tour. (Oct.)
close
Details