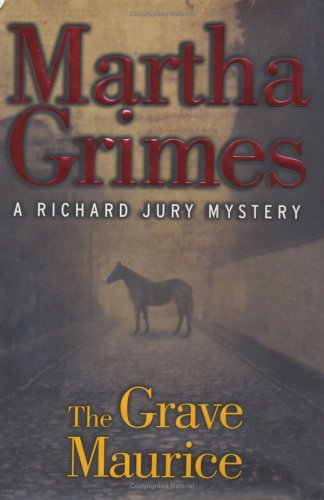 In the 18th entry in this popular series (after 2001's ), Grimes serves up a convoluted hodgepodge of rape, kidnapping and murder, then throws in corporate greed, animal rights issues and assorted satires of modern British society. Supt. Jury is hospitalized following a shooting in an earlier case. His aristocratic assistant, Melrose Plant (aka Lord Ardry) overhears two women in a pub curiously called the Grave Maurice discussing the disappearance of horse enthusiast Nell Ryder, who turns out to be the daughter of Jury's doctor, the first of many implausible coincidences. Nell's devoted 16-year-old cousin, who's also named Maurice, has been in a grave mood following Nell's apparent abduction. This poor lad must also cope with his father's death, his mother's flight to America and a growth spurt that has left him too tall to be a jockey, his life's ambition. Most of this long and winding tale deals with the world of horse racing and its seamier sides. Pregnant mares are being badly treated at a stud farm where their urine is collected for a commercial menopause drug. People and prize thoroughbreds get snatched away in the night, and, to the dismay of his elders, a greedy stepbrother has left the Ryder farm to peddle IPOs in London. Jury's investigation gets off to a tardy start, by which time Plant has dug himself in deep, even buying his own horse to try to understand the lore of racing. Frequent digressions divert the sleuths (and the reader) from the investigative trail.