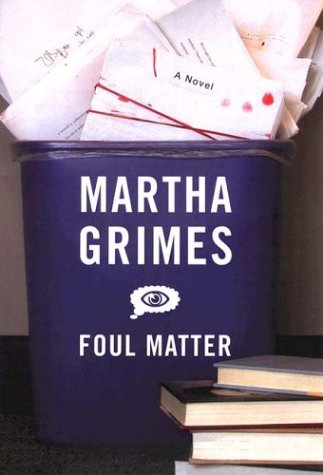 Red pencils draw real blood in this delightful publishing world crime spoof by Grimes, expert storyteller and bestselling author of the Richard Jury mysteries (, etc.). When Paul Giverney, a hot suspense novelist, seeks a new publisher, he decides on the house of Mackensie-Haack under the condition that they dump their highly respected and award-winning author, Ned Isaly. Ruthless president Bobby Mackensie will stop at nothing to sign Giverney, even though breaking Isaly's contract is a legal impossibility. His solution? Sign another contract—this one with two hit men, who are hired to knock off Isaly. What Mackensie doesn't know is that Candy and Karl are killers with scruples and a keen interest in literature. Isaly, meanwhile, is totally engrossed in finishing his current novel and barely notices the two men as they mingle with Isaly and his friends at popular New York City literary watering holes. Not even when a multitude of bumblers follow him on a visit to his hometown of Pittsburgh—in one of the most humorous episodes in the book—does he realize his plight. Although verging on the caricaturish, the characters are memorable, especially the hit-men duo. Insider publishing lingo, a quirky plot, atmospheric settings and Grimes's dry sense of humor make this a delectable bonbon of a book.