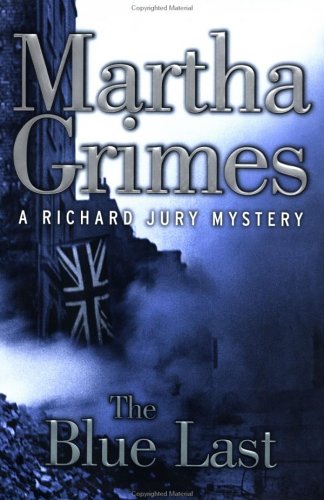 Reading Grimes's 16th Richard Jury novel (, etc.) is like watching a good movie on TV constantly interrupted by commercials. The author used to produce well-crafted, atmospheric works with delightful characters, but in recent years they've become unnecessarily long, overpopulated with minor characters (including Melrose), who take up a lot of time while contributing little to the crime at hand. The premise here is promising enough: the bodies of a woman and an infant turn up in the last unredeveloped bomb site in London (a pub called the Blue Last), victims of the final heavy German bombing of WWII. The woman, identified as Alexandra Tyndale, was the daughter of a wealthy brewing magnate; the infant was the daughter of Alexandra's nanny. Or was the infant, in fact, Alexandra's daughter, whom the nanny swapped with her own child to make her heir to the Tyndale fortune? It's all quite Victorian. Called in by his friend DCI Mickey Haggerty to help on the case, Richard Jury soon finds himself involved with a murder that could be related. Two children, Grimes's usual pathologically precocious tots, enter the action, as does Melrose with a whole subplot of his own. Because of this excess baggage, the reader must wait impatiently for the mystery to resume. A far-fetched solution will satisfy only the author's staunchest fans.