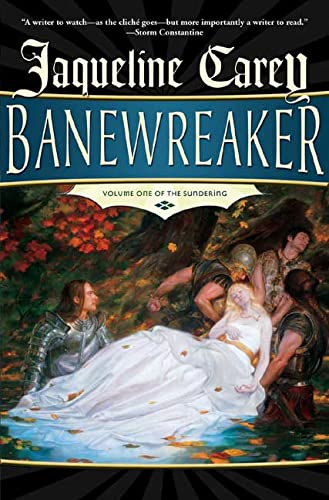 BANEWREAKER: Volume One of the Sundering

Following her well-received Kushiel's Legacy trilogy ( , etc.), bestseller Carey takes a daringly different tack in the first of a new epic fantasy series that focuses on seven gods rather than an ingratiating human heroine like the trilogy's Phèdre nó Delaunay. Readers may be overwhelmed at first by the vast cast of larger-than-life characters, including many exotic creatures, fanged, toothed and winged, but as the gods and their assorted hangers-on behave more like real people than mythic heroes, they gain in sympathy. Haomone, the eldest of the seven gods, and one of his younger brothers, Satoris, who sundered the earth with his sword, are in rebellion. Satoris's primary lieutenant, Tanaros Blacksword, who has lived 1,000 bitter years after killing his unfaithful wife and her lover, his king, endures the irony that he must kidnap but safeguard her beautiful descendant, Cerelinde, who is about to be married. The poignancy of Tanaros's situation is palpable but never overplayed. Also moving is the plight of Lillias, a beautiful sorceress also a millennium old, enamored of Callendor, a colossal dragon. Perhaps nowhere in fiction is a dragon described as remarkably or as lovingly, a creature of unbelievable power yet also of gentle tenderness. This is a memorable beginning to what should be another strong series.