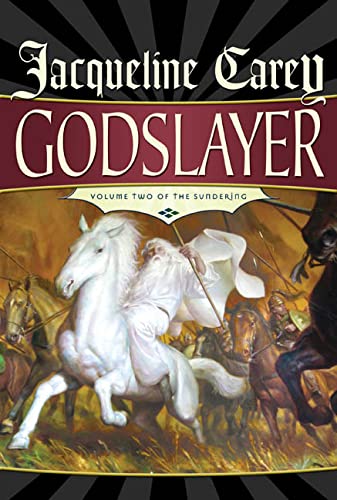 Godslayer: Volume Two of the Sundering

Lord Satoris Banewreaker has the best of intentions when he opposes Haomane, his brother god, but his actions sunder the world of Urulat. Carey's complex Sundering fantasy series, of which this follows 2004's , challenges the reader more than her well-received Kushiel trilogy ( , etc.). The stately pace, the plethora of names and sentient species (of which Man is only one) and the difficult main characters—cold, dignified gods—will put off some fans of the earlier, more accessible series. In addition, the author owes too obvious a debt to Tolkien: hobbitlike folk bear powerful, mystical objects analogous to Frodo's ring, while the ethereally beautiful Cerelinde could have been lifted bodily from Loth Lorien. On the other hand, a figure like Tanaros, who retains his honor by slaying his wife and king for betraying him, shows Carey can still create strong, original characters, and the climax, when gods and men fall in battle like ninepins, not only nicely ties everything up but is quite moving as well.