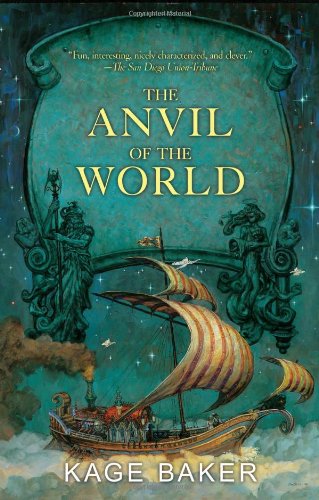 THE ANVIL OF THE WORLD

Best known for such time-travel novels as , Baker now turns her hand to humorous fantasy in this picaresque tale of a retired assassin, Smith, who is just trying to stay on the right side of the law, but who continually finds himself knee-deep in mayhem. Smith takes a job as a caravan master, shepherding a cargo of one gross of glass butterflies and a variety of eccentric passengers on a dangerous journey from the city of Troon to Salesh-by-the-Sea. Most notable among his passengers are the decadent Lord Ermenwyr and his nurse Balnshik, neither of whom are entirely mortal. Surviving his stint on the road, Smith eventually buys a decrepit resort hotel in Salesh-by-the-Sea and, aided by his talented former caravan cook, also named Smith, turns it into a raging success. Unfortunately, on the eve of the Festival, the most profitable day of the year, things begin to get dicey. Lord Ermenwyr pops in incognito, on the run from a sorcerous rival, then the health inspector turns up, just as a yellow journalist well known for blackmailing his victims is found dead, perhaps by magic, in one of Smith's best rooms. As usual, Baker successfully combines witty dialogue, well-drawn characters and an eye for telling details. Particularly memorable are her wind-up caravan with its heavily muscled keymen and Mrs. Smith's deftly described culinary masterpieces. Although not as substantial as her time-travel novels, Baker's latest is good fun and should please fans of quality fantasy.