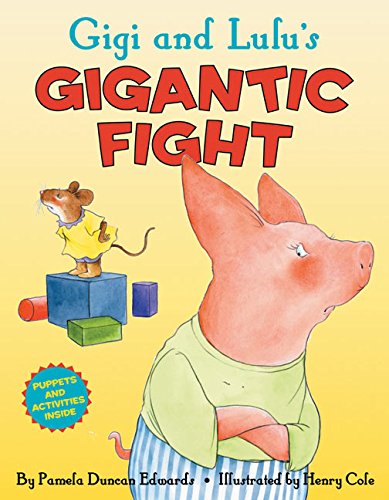 Intense friendships are a fixture of childhood but suppressing one's individuality is never a good idea, as Gigi the pig and Lulu the mouse discover. All the adults chuckle over the many ways the two gal pals are "peas in a pod" (they eat the same lunch, accessorize their identical outfits with blue tail bows and spotted yellow shoelaces). But when Gigi knocks down Lulu's block house, the friendship crumbles in an instant, and no urging from grownups helps ("Give each other a hug and make up," says their teacher, a goose). Until "Twin Day" at school, when everyone except Lulu and Gigi comes dressed as their favorite peer, and the pig and mouse have an epiphany. "We do some things the same," Gigi realizes. "But we like lots of things different. I guess we're not like two little peas in a pod after all." "No," says Lulu. "But I think that's okay." Longtime collaborators Edwards and Cole ( ) may not be peas in a pod, either, but they are the definition of simpatico. Edwards's empathetic, economic writing is just the right match for the sly observations that animate Cole's anthropomorphism (Gigi's hog father reads ). The didacticism may be more bald-faced here than in the team's previous efforts, but their virtuosity makes the message go down easy. Ages 4-7.