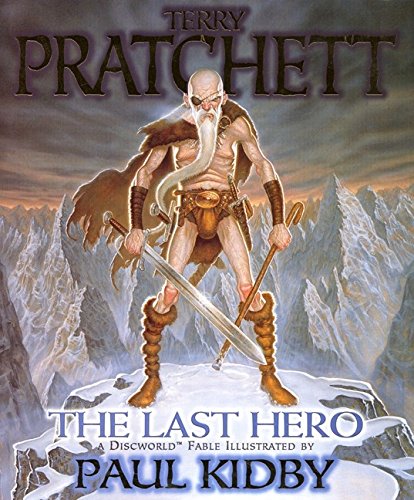 Cohen the Barbarian, aka the Emperor Ghengiz Cohen, hero of 26 Discworld fables, and his Silver Horde go gentle into any good night? Never. Not even if they're held together by various elasticized supporters and forget where they left their false teeth. The gods unpardonably let Cohen and Co. succumb to old age, and the members of the Horde—Boy Willie, Caleb, Truckle and Hamish, who's ("Whut?") stone deaf—still want drink, treasure and women, even if they admit they've had to ease back on the last one. Cohen gets a bard to record their one last universe-defying hobble toward immortality, and old age has rarely been so gut-splittingly yet accurately portrayed here, embellished by Paul Kidby's wacky and wicked illustrations. The Horde's last quest is to return the fire Cohen stole long ago from Dunmanifestin, the gods' ultimate Good Address. Unfortunately, that will destroy the magic holding the world together, so Lord Vetinari of Ankh-Morpork "workshops" the situation ("the means by which people who don't know anything get together to pool their ignorance") and sends a dragon-powered vessel crewed by an inventor, a soldier, a wizard and an orangutan librarian to stop Cohen and his tottery Horde. Pratchett lets fly sly volleys at today's civilization and skewers nearly every barbarian-fantasy cliché rampant in too many books and films. This far-out farce rollicks along hilariously enough to make the inevitable aging process, if not palatable, at least worth a few good belly laughs.