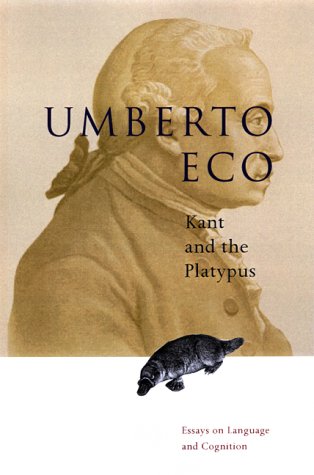 Kant and the Platypus: Essays

Consider the platypus. With its famous molelike body carrying a beaver's tail and a duck's beak, the beast confounded the first Western scientists who studied it in 1798. Was it a mammal or a reptile? Did it lay eggs? Was it just a taxonomic hoax? The platypus eventually found its rightful place in the animal kingdom, but as Eco (Travels in Hyperreality, etc.) shows in these challenging essays, the questions it raised about language and perception still animate some sharply contested semiotic debates. Writing with his customary keenness of intellect, Eco ranges widely over metaphysical terrain, drawing on Aristotle, Heidegger and C.S. Peirce to inform his discussions. Revising aspects of Kant's philosophy in terms of cognitive studies, Eco ponders how we identify the things around us and argues that meaning in the world is ultimately contractual and negotiable. When Aztecs first saw horses ridden by Spanish conquistadors, for example, they used their previous knowledge to surmise that the invaders were riding deer. In another example, Eco investigates how we can recognize a Bach suite for solo cello, even when played by different soloists or transcribed for the recorder. Throughout, Eco gamely reconsiders his 1976 work, A Theory of Semiotics, over which many a gauntlet was testily thrown, and revisits other key moments in the history of semiotic research. This collection will certainly appeal to specialists. But Eco's ability to balance technical subject matter with broadly intelligible anecdotes and illustrations should make it valuable and pleasurable for anyone seeking a gallant introduction to the philosophy of language. (Nov.) FYI: Also in November Harvest will release Eco's Serendipities in paperback ($12, ISBN 0-15-600751-7)
close
Details