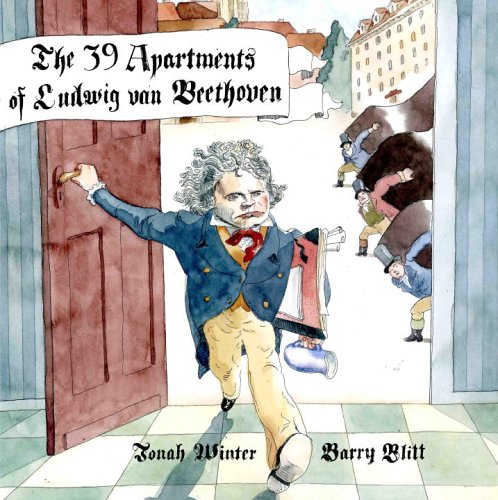 The 39 Apartments of Ludwig van Beethoven

While the pseudo-scholarly tone of this amusing "mockumentary" will undoubtedly float over the heads of some, older readers will enjoy its tongue-in-cheek lampoon of portentous documentaries. Beginning with the fact that Beethoven (1770–1827) "owned five legless pianos and composed great works on the floor," the narrative then points out that he lived in 39 different apartments—"(See book title.)" Winter ( ) and Blitt ( ) combine comic brio with audacious fabrication to suggest how difficult it was for the poor fellow to move his quintet of pianos from one place to another. They suggest, for instance, that a nearly deaf Beethoven's playing was " " and support the statement by claiming historians have found "hundreds of cotton balls with traces of dried earwax" in his neighbors' apartments. Blitt visually elaborates on each outlandish, allegedly well-researched detail. Illustrating a piano wheeled through an obliging neighbor's apartment, the artist pictures the movers carrying the piano across a dining room table midfeast. The unseen narrator's droll tone sends up the hushed, dramatic voice of an announcer: "Why did Ludwig move after only eight and a half days? Was it, as his diary suggests, because of the 'hideous stinky cheese smell' that filled his apartment? We do not know." A witty spoof of a familiar genre, this irreverent account of a brilliant musician is full of satiric pleasures (and ends with an author's note that sorts fact from fiction). Ages 4-9.