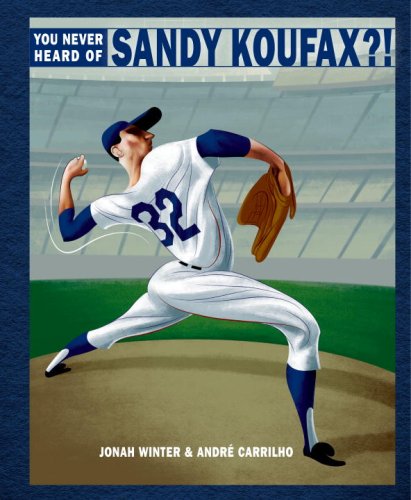 You Never Heard of Sandy Koufax?!

The huge lenticular cover image of pitcher Sandy Koufax in action makes this book hard to ignore; Winter’s fan-in-the-stands-style prose and Carrilho’s high-impact, editorial-style images make it hard to forget. Neither author nor artist “explain” the famously self-contained 1960s Dodgers pitcher (“Just when you were startin’ to understand him, he’d haul off and throw you a curve,” says the anonymous former teammate who serves as narrator). Instead, they capture what it feels like to be in the presence of an exemplary athlete. The obstacles that Sandy Koufax faced—physical limitations; anti-Semitism (“Some of the guys said some pretty lousy things behind his back—things I can’t repeat”)—are portrayed with zero sentiment; readers will root for Koufax because he is an engine of pure action. Debut artist Carrilho, offering texturally complex, digitally manipulated pencil drawings, has a bold, arresting aesthetic: while his harsh shadows, distorted perspectives and angular faces speak of a hardboiled reality, the baseball field itself is a storied place, rendered not in green but gold. Koufax becomes a figure of totemic strength, his eyes narrowing to black slits underneath bushy eyebrows, his body twisting as he delivers the perfect pitch. Not just a home run, this book is a grand slam. Ages 4–9.