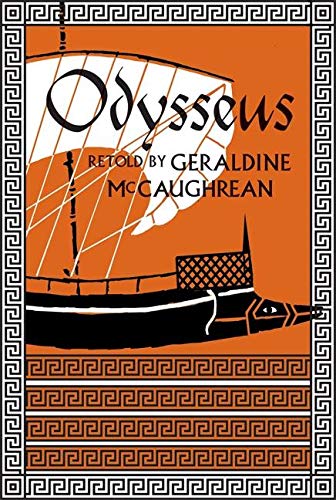 In this first in a planned four-volume Heroes series, McCaughrean ( ) offers a vivid and accessible retelling of the Ithacan king's long, strange trip home after his victory at Troy. Readers unfamiliar with Homer's will likely feel comfortable with this prose version, a straightforward account that hits the legendary highlights. The author does not shy away from a fair number of appropriately gory scenes, as when Cyclops "nibbled [Odysseus's] men like skewered lamb," or when Odysseus, rather than eat the Sun God's cattle, roasts his pet bird to feed his crew. The hero's succumbing to other urges occurs off-stage, as when the goddess Circe leads him to her "white and silver bed." Readers will get a good sense of the peril involved in offending Poseidon and learn the importance of stopping to ask for directions (Odysseus detours to Hades for his). The narrative's rhythm evokes not only the original epic but the ceaseless movement of the "world-encircled sea," as when Queen Penelope looks out the window toward the water and sees only "the waves, arriving, always arriving, always beaching on the shores of Ithaca." Readers will eagerly anticipate , scheduled to arrive in spring 2005. Ages 9-14.