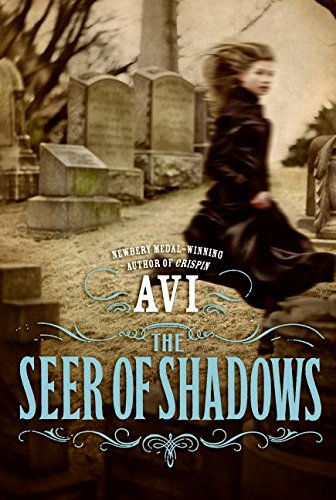 The Seer of Shadows

Newbery Medalist Avi ( ) sets this intriguing ghost story in 19th-century New York City, where a photographer’s apprentice has a horrifying run-in with a spirit bent on revenge. In the fall of 1872, 14-year-old narrator Horace Carpetine reluctantly becomes involved in his employer’s scheme to dupe a superstitious client, wealthy Mrs. Von Macht. The plan is to make a tidy profit by producing a double exposure and offering her an unusual portrait, one incorporating a superimposed image of her dead daughter, Eleanora. Events depart from the expected when the ghost of Eleanora literally enters the picture, and Horace discovers his ability to capture departed souls on film. Suspense builds as the Von Machts’ servant, Pegg, reveals secrets about the Von Macht family and explains that Eleanor’s angry spirit, brought back into the world through the camera lens, may want revenge on both Mrs. Von Macht and her husband. Mirroring both the style and themes of gothic novels of the period, the story takes ghastly and ghostly turns that challenge Horace’s belief in reason. Details about photographic processes add authenticity, while the book’s somber ending will leave spines tingling. Ages 8-12.