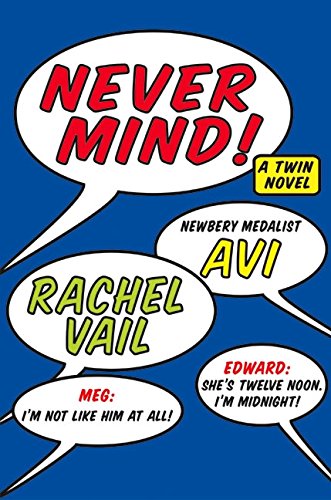 Collaborating on a novel alternately narrated by middle-grade twins, Newbery Medalist Avi ( ) and Vail (the Friendship Ring books) invent a sit-comish plot but redeem it by endowing their characters with strong voices and relaying their mishaps with plenty of wit. Entering seventh grade, Meg and Edward Runyon attend different schools for the first time. Meg has been accepted to a gifted and talented program (she confesses that she is neither gifted nor talented, just always tries "too hard"), while less academically inclined Edward opts for an alternative school. Resentment and rivalry kick in when Edward eavesdrops on desperate-to-impress Meg's phone conversation with the popular, snobbish Kimberly Wu Woodson and hears himself renamed Ted and described as the star of an almost-famous rock band. To pay Meg back, Edward becomes Ted, calls up Kimberly and agrees to have his band (he calls it Never Mind) perform at her party the following Saturday night. Avi and Vail let each twin take turns recounting the events of the intervening days as (predictably) complications multiply and tempers flare, and witty remarks rebound and insights come into focus. Although this novel doesn't measure up to either author's usual work, it vibrantly expresses universal tween woes, and underneath the hokey set-up, the characters' growth feels realistic and rewarding. Ages 10-up.