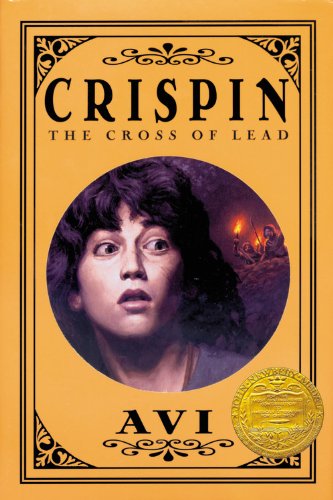 CRISPIN: The Cross of Lead

Set in 14th-century England, Avi's () 50th book begins with a funeral, that of a village outcast whose past is shrouded in mystery and whose adolescent son is known only as "Asta's son." Mired in grief for his mother, the boy learns his given name, Crispin, from the village priest, although his presumably dead father's identity remains obscure. The words etched on his mother's treasured lead cross may provide some clue, but the priest is murdered before he can tell the illiterate lad what they say. Worse, Crispin is fingered for the murder by the manor steward, who declares him a "wolf's head"—wanted dead or alive, preferably dead. Crispin flees, and falls in with a traveling juggler. "I have no name," Crispin tells Bear, whose rough manners and appearance mask a tender heart. "No home, no kin, no place in this world." How the boy learns his true identity (he's the bastard son of the lord of the manor) and finds his place in the world makes for a rattling fine yarn. Avi's plot is engineered for maximum thrills, with twists, turns and treachery aplenty, but it's the compellingly drawn relationship between Crispin and Bear that provides the heart of this story. A page turner to delight Avi's fans, it will leave readers hoping for a sequel. Ages 8-12.