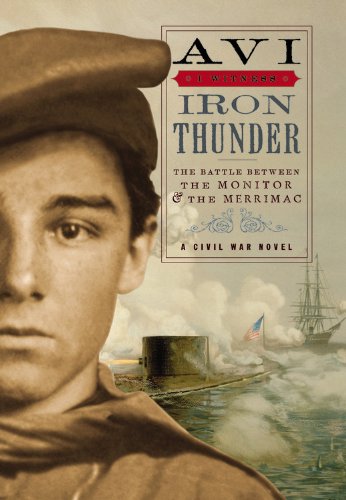 This fascinating adventure taken from U.S. history begins in Brooklyn in 1862, when Tom Carroll, 13, is hired at the Iron Works in Greenpoint for a secret project, derisively known around the borough as “Ericsson’s Folly.” John Ericsson, a Swedish inventor, is trying to build an ironclad ship that can battle the , a Confederate ship being outfitted with metal plates in Virginia. Working to support his widowed mother and ailing sister, Tom becomes Ericsson’s aide-de-camp. His insider status makes him a target of Secessionist spies, who offer gold coins in exchange for details about the ship; when Tom refuses, the bribes escalate to threats. Additionally, there’s intense pressure to get the ship finished—Yankee spies report the is almost done—and concerns persist about whether it will actually float. When the leaves port, Tom’s aboard, safe from rebel spies, but nervous about heading into the war that has already claimed his father. The spectacular clash with the caps this intense and action-packed account of a battle that changed the course of naval warfare. Illustrated with period engravings, this is gripping historical fiction from a keenly imagined perspective. An endnote detailing Avi’s research at the Mariners’ Museum in Newport News, Va., makes this a book that could launch a thousand field trips. Ages 8-12.