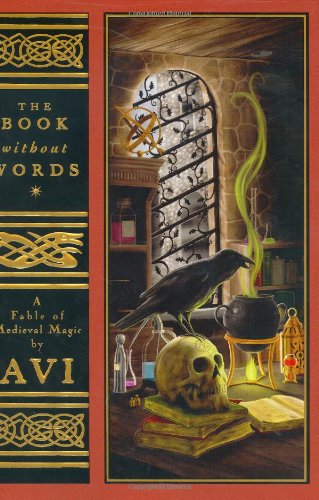 THE BOOK WITHOUT WORDS: A Fable of Medieval Magic

Newbery medalist Avi's ( nimble hand with scene-setting, characterization and dialogue will quickly draw youngsters into this tale set in 1046 England. And the author's multi-faceted plot will keep them intrigued—and guessing. On a foggy night in a dilapidated stone house, an aged, green-eyed gent named Thorston reads from a book whose pages are blank to most eyes. He follows the book's instructions as he stirs together an assortment of ingredients—including shredded gargoyle ears, two dozen white spider legs and "six white pearls of dried unicorn tears." He is concocting the "stones of life," which when ingested in four stages will allegedly renew his life. The final component is the "breath of life," which he plans to take from Sybil, his 13-year-old servant, whose life will end when Thorston regains his youth. On what appears to be his deathbed, the scheming man cryptically confesses to Sybil and his talking raven, Odo, that the book will reveal secrets of great value (alchemy? immortality?) if Sybil can "find someone with green eyes to read... the proper sequence," yet he directs her not to let a mysterious "him" get hold of the book. The greedy city reeve, the cocky apprentice to the local apothecary, a likable street urchin and a wise old monk also play roles in this enticing tale, which takes some chilling, unexpected turns before the history and the secret of "the book without words" become clear. book is filled with engaging, craftily chosen words. Ages 8-12.