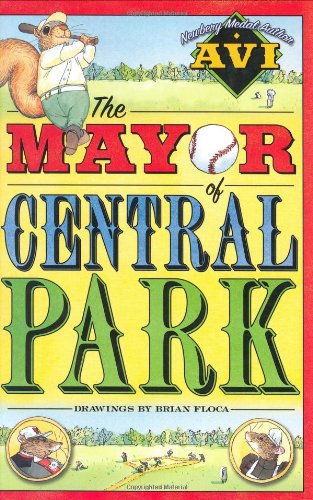 THE MAYOR OF CENTRAL PARK

With Newbery Medalist Avi () at the helm of an over-the-top romp set in 1900 New York City, "you got yourself a story busting to trot itself up Broadway like a tap-dancing centipede" (in the words of the omniscient narrator). The tale finds downtowner Big Daddy Duds, a baseball-loving jewel thief of a rat (the kind with whiskers and a tail), deciding it's time to move up in the world ("I like this here Central Park.... I like the green. Reminds me of money"). He and his gang soon take over, displacing the residents. Meanwhile Duds's independent-minded daughter Maud moves out ("It's time I strung my own beads") and falls in love with the squirrel Oscar Westerwit, mayor of Central Park and shortstop for the Central Park Green Sox. With traitors in both camps, double-crosses and plenty of intrigue, the action hurtles toward a turf war, but out-ratted and out-gunned, Oscar's rebellion is short-lived. It's up to Maud to propose a solution—a showdown game between the Green Sox and the Downtown Duds for possession of the park ("Anybody makes an error, I'll shoot him," Duds tells his team). The tough-talking prose would do any old gangster movie proud (Dud's players are "as nervous as a dime standing on edge"). If only James Cagney were available for the audio. Final artwork not seen by. Ages 8-12.