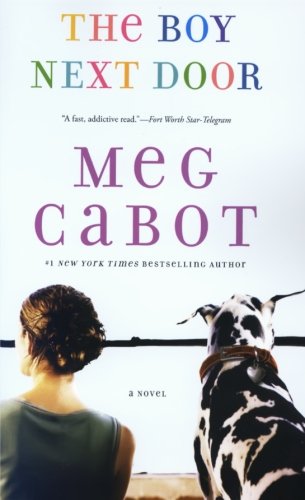 THE BOY NEXT DOOR

In her debut adult novel, Cabot (known for her extremely successful young adult fiction series the Princess Diaries, published under the name Meg Cabot) relies entirely on highly amusing e-mails to tell a fetching meet-cute story. New York City gossip columnist Melissa Fuller is known for being obsessive about Winona Ryder, dating the wrong men and being tardy for work. Arriving particularly late one morning, she explains to her colleagues at the New York that she was detained by the attempted murder of her elderly next-door neighbor, Mrs. Friedlander, who is in a coma. Always the good girl, Mel has volunteered to take care of Mrs. Friedlander's many pets until the neighbor's nephew Max, a famous fashion photographer, can be reached. Her co-workers warn her about Max, a notorious lady's man. Contrary to the gossip, when she meets Max he is down to earth, funny and kind. Despite the strange fact that he likes to be called John and appears to be between photo shoots, she begins to date him and learns that he shares her love for Stephen King novels and natural disasters. It doesn't take long for her to fall head over heels, or for Mel's mom to write, "Get a ring on your finger before you uncross those legs, sweetie." When a mysterious e-mail arrives explaining that there is more to her beau than meets the eye, she is duly upset and uses the power of her pen to get even. But when Mrs. Friedlander's attacker returns, will Mel and Max be able to put their differences aside to catch a killer? Full of clever e-mail banter and tongue-in-cheek humor, this cheeky novel should be enjoyed in one sitting.