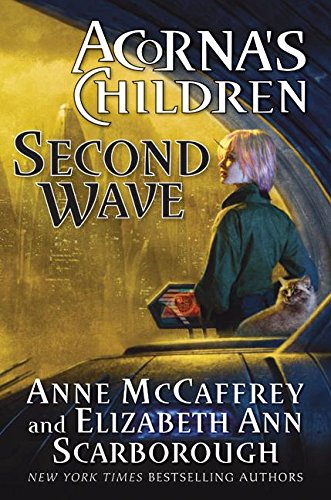 Unicorn girl Khorii of the Linyaari had a horn-full of curing to do in McCaffrey and Scarborough's first chronicle of the Acorna's Children series, (2005), about a deadly plague sweeping the universe. In this spirited second installment, the gifted young healer, her adopted android brother, Elviiz ("named for an ancient Terran king"), and human survivors of the planet Paloduro struggle to devise a vaccine. Khorii makes the connection between the plague and the new threat of devouring, wraithlike aliens. Meanwhile, Khorii's quarantined parents, Aari and Acorna, learn Khorii has a twin, Arriin, whose embroyo had been stolen from them long ago by the Ancestral Friends. As an adult, Arriin escapes via a stolen time-travel device. The twins' reunion, along with the punishment of the criminal Marl Fidd, is a highlight of this episode in the exploits of Khorii and her crew. Fantasy fans of all ages—but particularly girls 12 and up—should go for this one. ( )