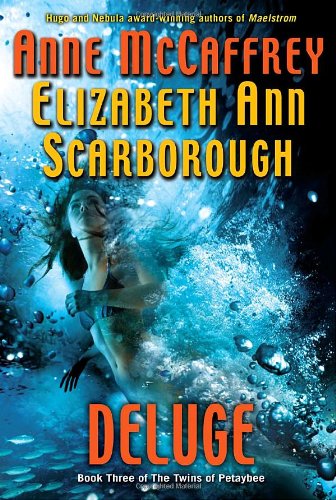 Deluge: Book Three of the Twins of Petaybee

Precocious twin selkies Ronan and Muriel set out for their heroic third mission (after 2007’s ): rescuing an old friend who’s been wrongfully imprisoned. Petaybee has been invaded by troops intending to arrest the twins’ parents and others for aiding Marmion de Revers Algemeine’s evacuation of the endangered inhabitants of Kanaka. Marmion herself is languishing in the Gwinnet Incarceration Colony. Ronan and Muriel dodge the soldiers and hitch a ride with space-faring deep-sea otters to reach Versailles Station, Marmion’s home base, where they hope to beg influential Federation friends for help. Instead they wind up incarcerated with other youngsters at Gwinnet’s Camp Neverland and cruelly tortured until their special skills and friends (including Zuzu, a telepathic cat) help them survive a tsunami and volcanic eruption and complete their mission. This concluding volume of the twins’ trilogy will primarily appeal to young, animal-loving SF fans.