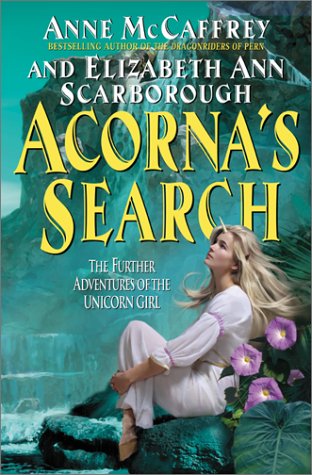 ACORNA'S SEARCH: The Further Adventures of the Unicorn Girl

Homecoming for Acorna of the Linyaari turns out to be not only bittersweet (because of the damage sustained to the planet during its occupation by the Khleevi) but treacherous in this fanciful continuation of the Adventures of the Unicorn Girl (; ; etc.) from fantasy titans McCaffrey () and Scarborough (). Acorna finds out that there's much more to her world than she or anyone else had imagined. It all starts when the teams who are helping to survey the planet for terraforming start to disappear, one by one. At first, Acorna is only a little worried about the disappearances of her friends and co-workers, but when her life-mate Aari goes missing, Acorna will move heaven and earth to bring him back. Mac (an android who wishes he were a Linyaari, even to the point of fashioning himself a horn), a cat named Roadkill and a youngish Linyaari named Thariinye all help Acorna in her search. Acorna and her hastily gathered team race against time (literally) and space to find their missing crewmates, pitting their wits against a world that has been decimated by warfare and a lack of information of any kind and transformed by technology that's more advanced than any they have seen before. As a book in a continuing series, this title will be better understood by those who've read the previous five volumes. There's enough story line to keep readers going, however, even when they encounter unfamiliar plot points from previous novels. This is a light, fluffy, fun read, perfectly complemented by the jacket art showing a beautiful blonde with a little horn stuck on her forehead.