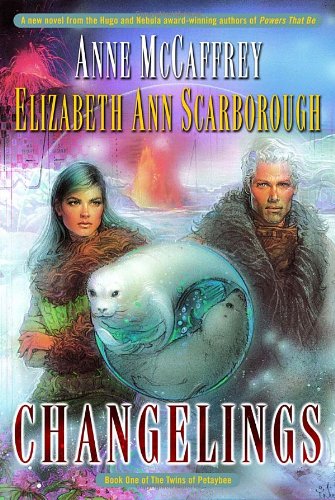 Changelings: Book One of the Twins of Petaybee

Those familiar with McCaffrey and Scarborough's first SF trilogy about life on the sentient planet Petaybee will best appreciate this solid start of a new series, which picks up where (1995) left off. Murel and Ronan, the precocious twins born to Maj. Yanaba Maddock-Shongili, administrator of Petaybee, and geneticist/selkie Dr. Sean Shongili, lead an idyllic, if frigid, life on the icy planet for their first eight years. Protected by their snow leopard and track-cat nannies, they change into seals, play with otters and telepathically communicate with each other and the fauna. When it appears their abilities have aroused the sinister interest of off-world scientists, they're sent to live on a space station with a family friend. Fast-paced adventure follows as the twins thwart their enemies and further deal with their selkie natures. Flat characterization, anthropomorphic animals, sentimentality and simplistic takes on various cultures (including Inuit, Irish and Hawaiian) make this novel best suited for those with a taste for less-sophisticated SF.