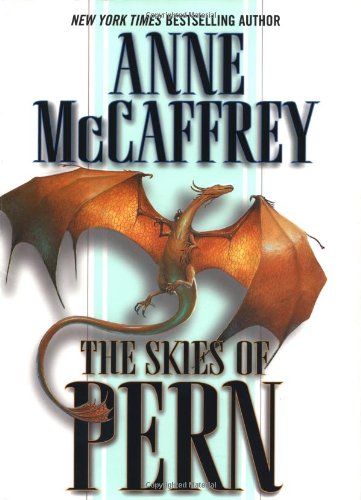 THE SKIES OF PERN

Bestseller McCaffrey's first Pern novel in three years returns to the world of her most popular series, Dragonriders of Pern, reprising almost all the best-loved Pernese characters. In earlier episodes, hero and heroine F'lar and Lessa summoned the captivating dragons and their riders from the remote past to save Pern from a devastating rain of Thread, while the later discovery of Aivas, the artificial intelligence that guided Pern's original human settlers, brought technological marvels like printing to Pern and helped shift the Thread-producing Red Star from its lethal orbit before it self-destructed. Now neo-Luddite Abominators are bent on destroying all of Aivas's gifts and returning watery Pern to its primitive state, while the Dragonriders struggle to find new purpose in a Threadless world. F'lar and Lessa uneasily contemplate second careers or—horrors!—retirement, while their genteel and amorous son F'lessan and perceptive green rider Tai arrive at both a dragon-assisted romance and a whole new role for the telepathic and telekinetic dragons. McCaffrey's various themes—traditionalism vs. technology, the necessity of societal change, feminist commentary on draconian psychology—are at times awkwardly integrated. And her slightly watered-down villains seem peripheral to the action, merely a means to showcase familiar personalities performing during crises. Nonetheless, as all her Pern novels amply demonstrate, McCaffrey's sexy and cunning dragons carry the day—and the novel—with impeccable, irresistible panache.