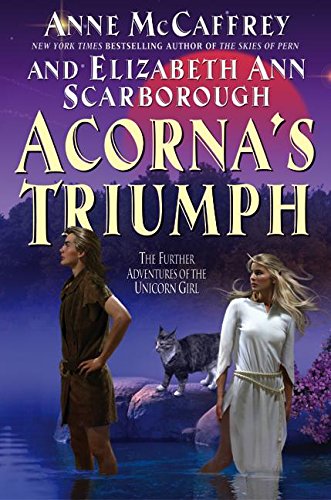 More episodic than its predecessors, McCaffrey and Scarborough's finale to the charming Acorna saga will please the two authors' many fans and lovers of horses and cats generally. Last seen in (2003), the unicorn girl has finally located her missing life-mate, Aari, though his exile in time has resulted in a disturbing personality change. Besides helping Aari to recover, Acorna must retrieve a hoard of jewels—chrysoberyls used in terraforming, stolen by a troupe of dancing girls with anti-gravity belts—from three races of sulfur-based beings, the Liquids, Solids and Mutables. She must also contend with the return of the Khleevi, disgusting insectoid aliens with evil designs on Acorna's home planet. And of course there is Grimalkin, the felinoid shape-changer, whose antics delay the well-deserved happy ending after all the bopping back and forth through time, across space and in flight from the Khleevi. While this light SF/fantasy romp is a hopeless proposition for newcomers to Acorna's travels, it serves as a fitting coda to the series. Both Acorna and Aari and their creators can ride off into the starlight with clear consciences.