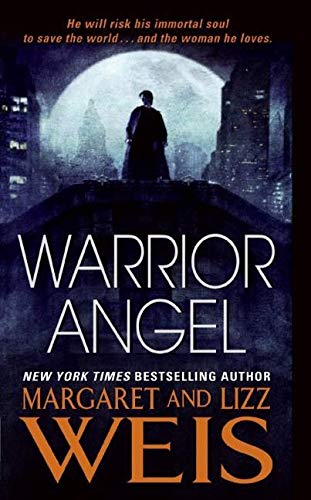 In this, the first book of a new series, veteran fantasy author Margaret Weis teams up with daughter Lizz for a smart, high-speed paranormal romance refreshingly free of vampires and werewolves. After a few Dark Angels escape from Hell to stir up trouble on Earth, Derek de Molay, a former Knight Templar and now a stubborn, headstrong angel, gets stuck with a less than agreeable assignment: go back to Earth on reconnaissance disguised as a mortal, complete with a real human body and orders forbidding him to use his powers. His mission is to watch over Rachel Duncan, a plucky young commodities trader in Chicago who's just become involved with a mysterious, charismatic and very wealthy client named Andreas Zanus. Soon it becomes clear that Zanus is one of the Dark Angels, and his designs on Rachel aren't exactly romantic. With a playful sense of humor, a page-turning plot that keeps Rachel and Derek just close enough to throw off sparks, a tightly constructed supernatural world and plenty of suspense, readers will have a devil of a time waiting for the next installment.