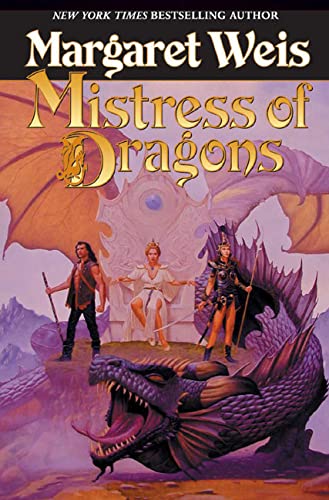 Best known for her successful partnership with Tracy Hickman (, etc.), Weiss launches a new series on her own that's sure to please high fantasy fans. In the world of Dragonvald, an ancient race of dragons with its own parliament has kept apart from the race of men and refrained from meddling in their affairs. Since a renegade dragon, Maristara, seized the human realm of Seth three centuries earlier, an Amazonian order of priestesses with magical powers and the Mistress of Dragons have kept the peace. But evidence that Maristara and a partner-in-crime have indulged in their taste for human flesh means renewed trouble. Draconas, who can change into a man, sets forth into human territory to resolve the problem. The ensuing conflicts and complications, as Draconas learns the true identity of the Mistress of Dragons, will keep readers turning the pages. A cliffhanger ending, involving the birth of a part-dragon human baby, will leave them eager for the next installment.