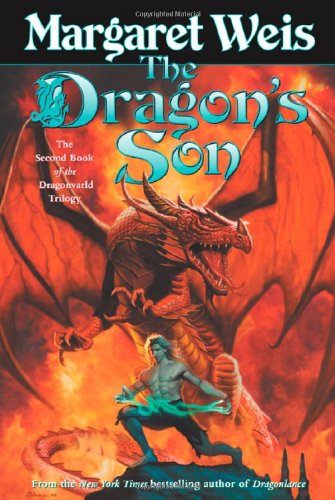 Weaving more spellbinding magic in the second book of her Dragonvarld trilogy, Weis charts the fate of Melisande's twin sons, whose bloody birth marked the cliffhanging conclusion of (2003). Marcus, "human, born of love and magic," and Ven, "half-dragon and half-human, born of evil," are at the crux of a conflict within the Parliament of Dragons that secretly watches over a wonderfully detailed landscape similar to medieval Earth's. The innocent twins grow up apart in vastly different worlds: Prince Marcus inherits his mother's dragon magic and lives a semi-normal life as King Edward of Idlyswylde's bastard son, while Ven, human from the waist up (but blue-scaled, white-clawed dragon from the waist down), grows up the impoverished charge of a cold, grieving ex-soldier. Dragon's blood imbues each boy with fantastic abilities, but also puts them in danger from rebel dragons disguised as humans. Readers' hearts will ache for the conflicted Ven. Other notable characters include the wise Draconas, a dragon in human form who seeks to protect the twins and to uphold the ancient dragon law against killing humans, and Evelina, the vain and foolish gypsy who figures in Ven's reunion with his long-lost twin. A surprising, fire-breathing conclusion, sure to please dragon fans, sets the stage for volume three.