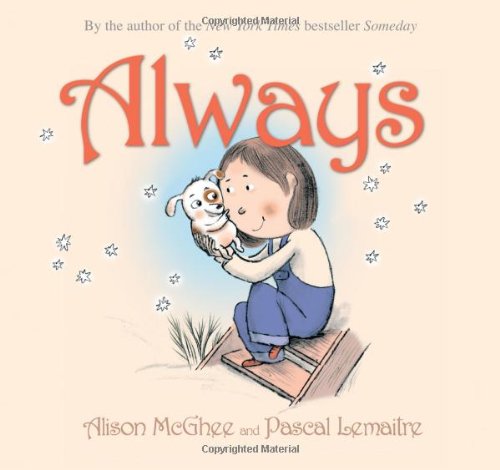 The author of pens another declaration of love—this time in frankly comic mode. A girl in overalls sits on the front porch of her little wooden house. “I am the keeper of the castle,” her diminutive spotted pooch tells her, one paw on his chest, the other held dramatically out to the side. “And I will keep the castle safe.” In successive spreads, Lemaître ( ) shows the dog in roguish scenes of derring-do: fighting a duel with a furry enemy atop the peak of the roof (“I will tame the squirrels”) and barking at a gang of mouse pirates whose ship's sail is a sock (“I will chase away evil”). The dog's statements grow ever more grandiose: “I will divert meteors,” he says, standing on a chimney armed with a baseball bat. “Why, you ask?” the canine Cyrano asks in closing, as the girl scoops him up and cradles him in her hands. “Because live here.” Succinct, funny and, in its way, action-packed, this is written in the universal language of affection—only the stonyhearted could withstand its charms. Ages 4–8.