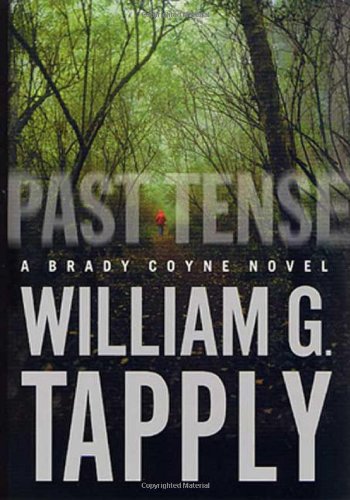 PAST TENSE: A Brady Coyne Mystery

Brady Coyne is appealing and modest—both qualities that apply to this somewhat insubstantial mystery, Tapply's 18th to feature the Boston attorney (after 2000's ). He and girlfriend Evie Banyon are off to Cape Cod for a romantic weekend of "making love and eating lobster," but before their lobster tails are fully cracked, Evie's mysterious past shows up in the form of Larry Scott, ex-lover turned stalker, and a very public confrontation at a seaside restaurant. Their tryst is completely ruined when Evie discovers Scott's dead body the next morning. The police believe that one of them, or both, committed the crime, but don't have enough evidence to make an arrest. Evie sends Brady packing after they return to Boston—even he has doubts about her—and then vanishes. The story revolves around Brady's haphazard, persistent efforts to track her down in the unpleasant little town of Cortland, Mass., where Evie used to live and the stalking began. Gossipy and provincial to begin with, Cortland has a still uglier side that's revealed as Brady delves deeper. The mystery behind Scott's death is fairly transparent, though Brady is slow, perhaps too slow, to catch on. What catalyzes the novel is Evie's secret: What has she done? And why? She's not an entirely convincing enigma, though; a woman as interesting and tough as Evie wouldn't look twice at Scott, a janitor still living with his mother—much less let him intimidate her. Still, Tapply's often elegant prose is a pleasure, and fans will cheer Brady throughout. The book is from the "soft-boiled" school of mystery writing, but Brady is a pretty good egg.