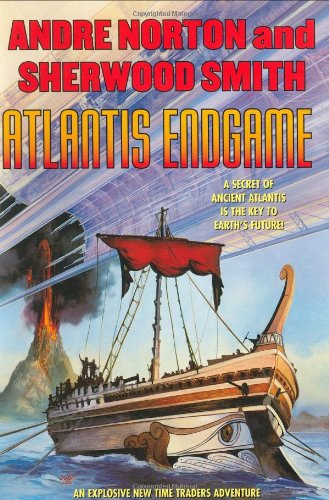 Was the cataclysmic blast that blew the island of Atlantis (aka Thera) to bits a natural disaster, or was it something more sinister? In this latest fast-paced Time Traders adventure (, etc.), SFWA Grandmaster Norton and Smith () take on the legend of Atlantis with a new twist—the blast had a bit of help from an alien species that our time-traveling heroes have encountered at least once before. The "Baldies," named for their complete lack of body hair, are a mysterious race of time travelers who appear to interfere in history to push humans toward some catastrophic future event—but what that event is and why the Baldies need to interfere is something the human time travelers have yet to discover. Dr. Gordon Ashe and friends are joined by a new companion, Linnea Edel, an archeologist who finds an anomalous piece of jewelry at a dig on the island of Thera and brings it to Gordon for examination. This piece of jewelry launches another harrowing time traveling trip—this time to ancient Greece. Norton lends her considerable skill and familiarity with time travel SF to this series, which poses some interesting questions about how humans view societies ancient, new and alien. There's plenty of adventure, a fair scattering of archeological trivia and some new twists on the alien-human relations that carry forward from the previous books.

A Crown Disowned: Volume Three of the Cycle of Oak, Yew, Ash, and Rowan