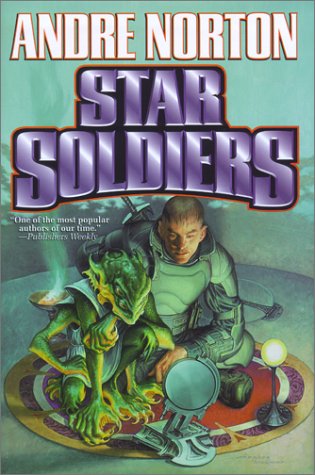 Two of SFWA Grand Master Norton's earlier novels, (1955) and (1953), offered here with minimal textual changes, should be just as enjoyable to the grandchildren if not great-grandchildren of the original readers. In , around A.D. 4000, humans are valued by Central Control as mercenaries, but otherwise are at the bottom of the galactic hierarchy. Kana Karr, a young swordsman investigating the mysterious deaths of some of his comrades, stumbles on a conspiracy that endangers Central Control and the human race alike. Some 4,000 years later in , the Patrol cruiser makes its last landing on an unknown but habitable planet. Three of the crew, the Rangers Kartr (human), Fylh (a birdlike Trystian) and Zinga (a reptilian Zacathan), become a sort of Three Musketeers to save the natives from the ruthlessness of other humans. They succeed well enough to eventually receive a shipload of assorted refugees and discover the secret of this "unknown" planet. The language, plot and characterization are somewhat simpler than we are used to today, but the settings come alive as well as anybody's. Moreover, Norton's handling of ethical issues, particularly the uses of telepathy and relations with nonhumans, is quite complex. This is no less remarkable when one considers that she was writing in the days when telepaths were often supermen and aliens usually depicted as BEMs.

Knight or Knave Leopard in Exile