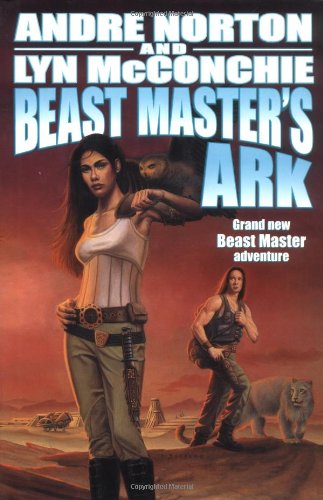 On the planet Arzor, Terrans must not only win over the indigenous Nitri but face a common enemy, the mysterious Death by Night, which leaves only skeletons behind, in this long-awaited addition to the Beast Master series from SF Grand Master Norton and New Zealander McConchie. Earth itself is now only a memory, a charred cinder in space destroyed by the ruthless Xik invaders. The human survivors have populated other planets, and their travels on the Ark have the dull regularity of a daily commute. The Nitri accept 19-year-old Tani, the book's naïve, winsome heroine, because she's of Cheyenne Indian stock on her father's side. Despite physical differences, the Cheyenne and the Nitri share much in terms of custom, speech and tradition. The Xik killed Tani's father, who as a Beast Master had an affinity with animals. Her Irish mother, however, had mistrusted such people and taught Tani to loathe them. Since Tani will one day become a Beast Master, she must overcome the prejudice instilled by her mother. Through her special understanding of animals, Tani gains the affections of a fierce, horse-like Duocorn, among other wondrous creatures. The plot proceeds at a leisurely pace as the authors dwell on tribal ways, but Tani and her animal companions take on the Death by Night in an exciting climax that should leave fans eager for the next installment.

The Key of the Keplian